The trade and investment landscape in Africa has continued to draw interest from lenders, particularly in West Africa, with notable changes in origination strategies.

In Q1 2021, Orbitt reported a 26% increase in the number of unique enquiries from lenders originating funding opportunities when compared with the same period in 2020. Some lenders have seemingly decided to focus more on particular regions (and in some cases, individual countries) citing “due diligence processes being disrupted due to travel restrictions” as a main reason, and “risk mitigation strategies” as the second most common reason.

These have prompted lenders to focus on regions and/or countries where they have representative offices or a deep and reliable network.

Two hundred and thirty-one unique lender enquiries were recorded in Q1 2021. Of these, 58% of the companies are either headquartered in West Africa or have their main operations in West Africa; 17% are based in East Africa and 16% are based in Southern Africa. Only 5% of these companies have cross regional operations, compared to the 14% recorded in Q1 of 2020 (pre-pandemic).

A considerable portion of the lender enquiries included a working capital component in the proposed transaction structure (35%). Supply chain finance and asset financing components were also notably present in discussions (34% and 30% respectively).

This quarter, the average ticket size was recorded as $12m, an increase from the $10m average recorded in the same time period for 2020. Twenty percent of the companies receiving enquiries from lenders reported annual revenues between $100m and $250m, and a further 13% reported annual revenues of between $250m and $500m, showing lender appetite for the larger companies.

However, a considerable amount of enquiries were received by companies reporting annual revenues of between $1m and $5m – particularly from the more impact-focused lenders.

Africa-focused lenders may have adjusted their origination strategies this year, with international lenders working around travel restrictions and disruptions to due diligence processes, but activity on the continent continues to increase. Lenders are considering larger transactions and employing additional credit enhancements to mitigate perceived risks in transactions. 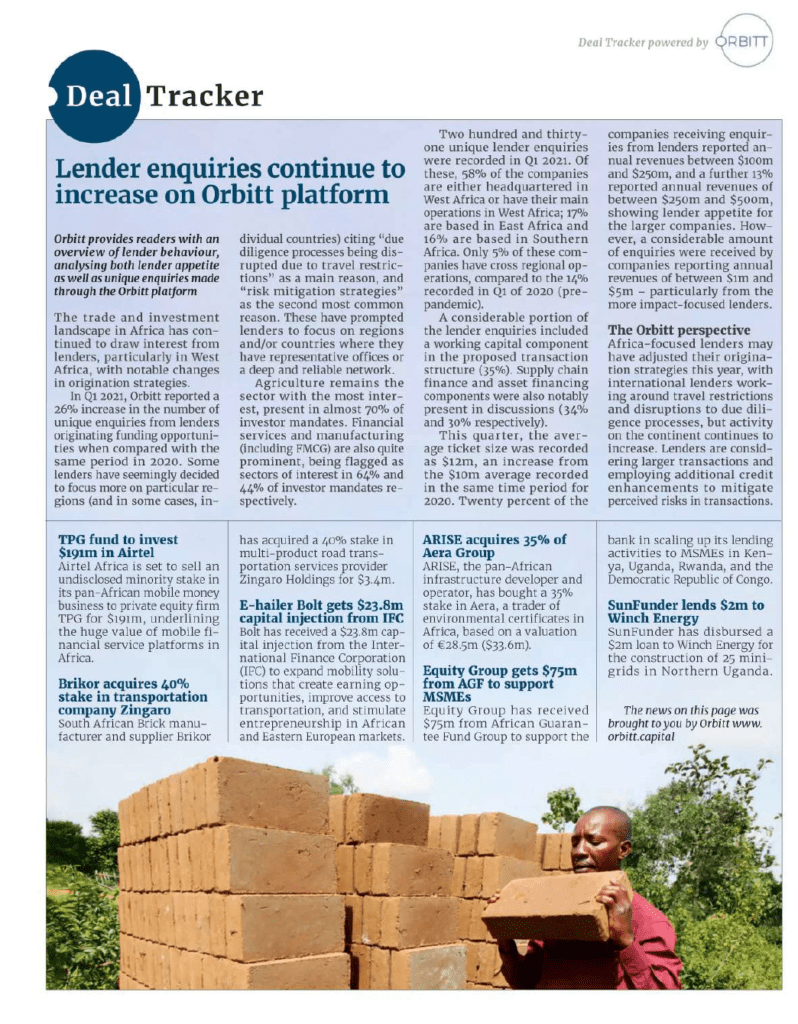