During the Covid-19 pandemic, food security, access to healthcare and utility services such as power, water, gas and telecommunications have become national priorities. Corporates involved in the provision of these primary services have exhibited resilience to the downturn based on the robust demand for essential goods and services. The success and the scale of the bond issuance of the West African telecommunications company Sonatel reflect the business fundamentals of the firm and the attractiveness of the telecommunications sector. The transaction demonstrates that the West African debt capital market has the capacity to absorb a large issuance despite a challenging economic environment.

Following a tender process launched by Sonatel last year, the Senegal-based investment bank Impaxis won the mandate to bring a CFA100bn ($180m) transaction to the local capital market and have it listed on the Bourse Régionale des Valeurs Mobilières (BRVM, the bourse that serves the West African CFA franc zone), says Ababacar Diaw, CEO of Impaxis Securities, the capital markets and brokerage arm of Impaxis.

We were looking for a firm knowledgeable of the local debt capital market and able to provide us with a sizeable facility that would bridge our immediate finance capex requirements, whilst awaiting the proceeds from the issuance transaction”, says Sékou Dramé, CEO of Sonatel.

Impaxis partnered with Credit Suisse London to arrange a €100m credit relay facility, Diaw says. The credit relay facility was fully drawn down prior to the bond issuance by Sonatel. This facility will be repaid by the bond proceeds. Currency risk is mitigated as the West African CFA franc is pegged against the euro. The CFA100bn bond was issued on the BRVM with a subscription period from 15 June 2020 to 15 July 2020. The transaction has been oversubscribed by 22% and closed in anticipation in early July. The debt instrument pays a semi-annual coupon of 6.5% and has a maturity of seven years.

The diversity of the investor base is one of the key features of the transaction with local banks, usually big players on this market, representing less than 20%. The in-depth structuring work and communication with a large base of investors, including two anchor investors, helped in the success of the transaction despite the unexpected arrival of Covid-19.

Two developmental lenders have taken leading roles in the Sonatel issuance. The African Local Currency Bond Fund (ALCB Fund) and the Emerging Africa Infrastructure Fund (EAIF) invested CFA5.8bn ($10m) and CFA15bn ($25m) respectively. The ALCB Fund, which is managed by Lion’s Head Global Partners (LHGP) Asset Management, was approached by Impaxis to act as an anchor investor and facilitator at an early stage, says Brock Hoback, executive director at LHGP Asset Management. It has worked with Impaxis and Sonatel in crowding in other anchor investors as well as providing guidance on the commercial and due diligence requirements of both local and international investors.

In the West African CFA franc zone, real economy transactions remain rare and the ALCB Fund is eager to broaden the types of investors coming to the market. “Sonatel’s social impacts, by enhancing financial inclusion, connectivity, and access to information across the income spectrum, are very appealing to the ALCB Fund as well as to other developmental lenders,” says Karl Von Klitzing, chairman of the ALCB Fund. EAIF, which is part of the Private Infrastructure Development Group (PIDG), has a strong mandate to stimulate infrastructure development in the region, says Sumit Kanodia, an investment director at Ninety One, the asset management firm of EAIF.

This transaction represented a good opportunity for EAIF to participate in a local currency bond issuance in the West African CFA franc zone, says Kanodia, adding that the fund initially committed to a significant share of the transaction with a credit approval of up to CFA30bn ($50m). Given the positive response of investors, the transaction was eventually oversubscribed by 22% and EAIF cut its participation by half to CFA15bn ($25m) to accommodate more investors in the transaction.

For the three years until 2019 Sonatel had a stronger average revenue per unit (ARPU) growth than other companies, translating into a continuous increase in revenues on a year-on-year basis since 2014 from CFA816bn ($1.5bn) to CFA1,087bn ($1.9bn) in 2019, according to Sonatel’s 2019 audited annual financial statements.

From a funding perspective, Sonatel’s leverage is also lower than most of its peers, says Diaw. It offers voice and data connectivity in rural areas and mobile money services to populations who do not have access to traditional banking solutions. It is one of the biggest employers in the region with more than 160,000 indirect employees and a major tax contributor, says Diaw.

The Sonatel bond issuance of CFA100bn is the largest issuance to date of a non-public entity on the BRVM.

The transaction has tested the depth and absorption capacity of the local investor base and displays that debt capital markets are a viable avenue for corporates to tap large pools of capital and diversify funding sources, says Brock. While Covid-19 is severely impacting the global economy, the current situation represents an opportunity for Sonatel and the telecommunications industry, says Dramé. Movement restrictions have accelerated the demand for digitalisation services, connectivity and network security. There is a need from corporates and individuals for a robust and improved digital ecosystem.

Telecommunications has become a staple industry, says Diaw, adding that mobile money and data penetration have not yet reached full potential. The success of the transaction reveals that the telecommunications industry in Africa is seen by investors as a resilient commodity against economic cycles, says Von Klitzing.

Read this Deal of the month, including Deal tracker and more via African Business Magazine 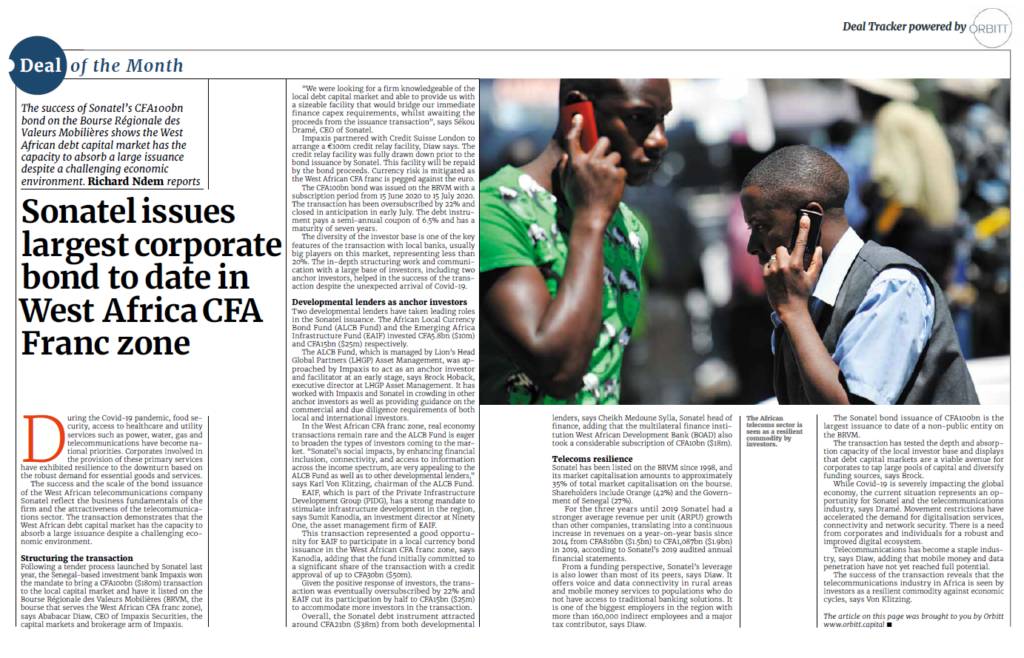