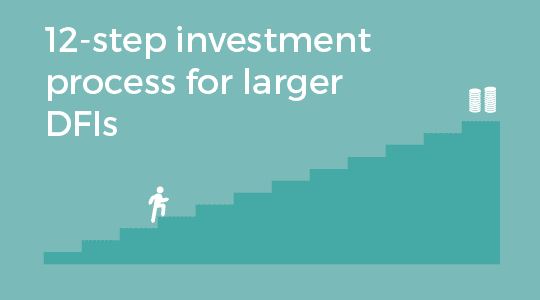 Technological innovation has swept across Africa in the past decade. There are almost one billion cell phone subscriptions on the continent, up from 129 million ten years ago. In addition, software advances have disrupted the way people from Senegal to South Africa live their daily lives—from traffic support to remittance technology to agricultural assistance. The region’s burgeoning fintech sector attracted about a third of all African venture funding in 2017.

Yet despite significant advances in connectivity, consumer technology, and the availability of economic and financial data across the continent, many of Africa’s most important investors are relying on manual investment processes.

These traditional methods of identifying investment targets slow down capital allocation for major Development Finance Institutions (DFIs), such as the International Finance Corporation of the World Bank Group (IFC), the European Bank for Reconstruction and Development (EBRD), and the U.S. Overseas Private Investment Corporation (OPIC). By extension, these conventional approaches restrict job creation and economic development. Just as the private sector looked to DFIs as the standard-bearers for impact and sustainable investing, so DFIs should mimic the private sector’s eagerness to internalise technology, update their standard operating procedures and transform the markets they work in.

As government-backed entities that invest in private sector projects in the developing world, DFIs play a crucial role in driving the economic development of emerging markets, including in Africa. The UK’s CDC Group, for example, is the largest single investor in private equity funds in Africa—having supported the growth of over 58 funds. But, DFIs are not maximising their potential, citing an excess of capital and a dearth of projects vetted for investment. While the appetite for private investors focused on Africa continues to grow, mobilisation of DFI capital remains slow. Many of the larger DFIs maintain a complex investment process that begins with the outbound identification of suitable projects and is punctuated by up to a dozen subsequent steps that involve manual diligence and deliberations.

12-step investment process for some of the larger DFIs

The efficient allocation and deployment of capital in frontier markets will require more tools at DFI disposal. This is because it remains cost prohibitive to be present in 54 countries across Africa, let alone in all emerging markets. The IFC has 22 offices in Africa, and both OPIC and Norfund have three each. This lack of physical capacity has led to a paucity of in-country personnel to source and screen potential investment opportunities. Neither is it feasible to expect DFI presence in every market. Therefore, to sustain and increase the stream of patient capital while transforming growing businesses without access to capital – all while enticing private sector participation – DFIs will need to leverage existing and new technologies.

Tech-enabled deal origination platforms, such as those employed by Private Equity firms, would facilitate an efficient and cost-effective origination process, drastically reducing the number of man-hours it takes to manually source and screen potential deals. To put it simply, digitisation will enable DFI funds to increase their impact. The challenge is that many of the established digital deal sourcing players do not adequately cover frontier markets, particularly Africa. This infers that the $50bn+ of Africa-focused capital is deployed through traditional means in conjunction with the frictions inherent in such investment processes.

DFIs should employ an end-to-end technological approach suited for frontier markets to capture the new efficiencies needed for increased investment. For example, Fintech could expose the potential of more creatively structured deals, such as those that embrace sector-specific inefficiencies, matching funds, or other new sources of private capital. Targeted deal sourcing platforms can be leveraged by DFIs to streamline research and enable more informed investment decision-making.

Despite the Sustainable Development Goals’ (SDGs) emphasis on African development, a $2.5 trillion development investment gap remains. DFIs have pointed to a lack of bankable projects in reference to their investment patterns, rather than a dearth of capital. But the upward trajectory of private investment in Africa over the past decade tells a different story. With a stronger approach to innovation, the DFIs could embrace a lower cost investment origination and sourcing model, which will mean higher rates of capital deployment in the region. This, in turn, leads to more robust economies and other positive externalities. From the Silicon Lagoon to Silicon Savannah, African innovators have embraced technological advancement with open arms, even at rates surpassing more developed regions. Development Finance Institutions have a responsibility to meet that enthusiasm and adopt a more tech-driven approach to investment.