Shaping a sustainable local business ecosystem that takes advantage of the transformation chain and proposes an import substitution strategy is at the heart of 54 Capital approach, says Yassine Benjelloun, Investment Partner at 54 Capital, an Africa focused asset manager which manages the group Turaco.

The holding company Turaco owns the operating companies Zac Ethiopia Manufacturing & Trading (ZEMT) and Health Care Food Manufacturers (HCFM) which operate in the soap, detergent and edible oil FMCG market segments in Ethiopia respectively. ZEMT and HCFM have been under 54 Capital management since 2014 and 2015 respectively, with Chief Investment Officer of 54 Capital, Saad Aouad, driving the strategy of the business and holding the position of Chairman of the Board of Turaco.

Value-added business strategies such as Turaco’s are often overlooked in Africa’s predominantly commodity exporting economies. The Fast-Moving Consumer Goods (FMCG) sector is a suitable candidate to measure the benefits of a value-added concept given that FMCG are often a first necessity and vital to people.

Many FMCG products are always in high demand and henceforth more resilient to macroeconomic considerations, Yassine emphasises, adding that the edible oil business is pivotal to the group strategy, contributing around 60% of revenues.

As such, HCFM’s oil business model is based on the local transformation of non-palm crude oil into high quality refined edible oil for domestic consumption in Ethiopia. Also, ZEMT produces and markets locally branded soaps, detergent and personal care products.

HCFM’s refining quality standards, and ZEMT’s manufacturing standards, have been set at the highest international norms which, combined with an efficient marketing strategy, has allowed the group to take a leading market share in their respective Ethiopian markets, Yassine reports.

African Alpha Investment Partners (African Alpha), an African focused advisory and investment firm, has been involved in Turaco businesses and financially committed to the group since 2017, says Brad Koen, Co-Founder and Director of African Alpha.

African Alpha has over the years contributed to the growth of Turaco by successively injecting equity in the business as well as bringing along equity partners.

As a result, HCFM has been able to increase its refinery capacity over the years, and ZEMT its product range and capacity, while African Alpha has become a major shareholder in the holding company Turaco, Brad continues.

In view of the success of Turaco businesses and growth opportunity especially in the edible oil business, 54 Capital and African Alpha had confidence that there was an opportunity to adopt a bolder approach, says Brad, who adds that African Alpha was mandated to structure and raise the additional funding.

Turaco strategy is three-pronged, Brad and Yassine confirm. Firstly, there is a need to increase the oil refining capacity of HCFM to meet the increasing demand for its oil brand, and for ZEMT to broaden its product range and manufacturing capacity. Secondly, Turaco intends to capitalise on its domestic market success by adding exporting capabilities. This will generate hard currency revenues for the group and create less reliance on the domestic banking system for conversion of currency, continues Yassine.

Thirdly, at present the group relies mostly on im-ported non-GMO crude oil which is then processed at HCFM’s oil refineries. With a view to increase the Ethiopian content in the finished product, the company plans to manufacture its own crude oil from Ethiopian sourced oil seeds. Reducing its reliance on crude oil imports will optimise HCFM’s US dollar cost base and foster the Ethiopian agribusiness value chain.

The loan proceeds will fund an increase in HCFM’s refinery capacity, more than doubling it over the next year. Its refining capacity will be further increased the year after that, when the solvent extraction plant is built and commissioned. The remainder of the loan proceeds will be used to provide growth capital to ZEMT’s soap and detergent business, says Yassine.

The new $22m of capital raised by the group is intended to optimise Turaco’s capital structure, which has hitherto been mainly equity funded, emphasises Brad. In view of this specific requirement, African Alpha together with the lenders crafted a flexible mezzanine debt financing arrangement.

The mezzanine debt has been raised by Turaco at a holding company level, and it will in turn push down the proceeds to its operating companies ZEMT and HCFM, without altering the utilisations and rankings of their existing trade finance and working capital facilities. Although Turaco will bear the foreign exchange risk related to its new debt obligations, the group’s projected hard currency export revenues should help to mitigate this risk.

A DFI and an investment fund join forces

Given the inherent social and development impact of Turaco’s business strategy in the agriculture space and the hybrid nature of the mezzanine loan, the capital-raising exercise involved two financiers with very distinct profiles.

The French development finance institution (DFI) Proparco, and one of East and Southern Africa’s leading mezzanine investment funds Ethos Mezzanine Partners (Ethos) will together advance the $22m mezzanine loan which has a five-year bullet redemption profile.

From Proparco’s perspective, this transaction represents an opportunity for its equity division to invest in Ethiopia for the first time on a direct basis. Ethiopia has the second largest population in Africa and shows excellent prospects for growth, particularly in the FMCG space says Guillaume Laurioz, Investment Officer at Proparco.

More importantly, Proparco was particularly attracted by the Turaco group’s business model which adds value to raw materials through local transformation. This is an important driver for socio-economic development, Guillaume concludes.

A debt instrument with an equity element

The mezzanine instrument includes an equity kicker feature which can enhance the funders’ returns if the business performs to plan, says Geoffrey Coombs, Senior Investment Officer at Proparco. Moreover, the bullet principal redemption profile provides the group with sufficient headroom to continue to grow its operations over the term of the loan. The funding structure stems from a lengthy process of collaboration between the lenders, the borrower, and its advisors, which has provided Turaco with a capital layer specifically tailored to meet its needs.

The strategy of structuring a secured debt instrument coupled with equity aspects has provided the lenders with a workable funding solution in terms of both security and return, concludes Sean Lederman, Director at ENS Africa, the lenders’ counsel.

Overall, the Turaco mezzanine debt instrument achieves two key objectives for the borrower. On the one hand, it provides the Turaco group with flexible non-dilutive growth capital to fund its expansion plans. And on the other, it reduces the group’s weighted average cost of capital, enhancing its shareholders’ returns.

Next steps for 54 Capital

54 Capital intends to strengthen its footprint in the FMCG space in Ethiopia, shaping a robust local industry made by and for Ethiopians, says Yassine.

However, do not expect to see 54 Capital entering several countries at once. Its philosophy is to limit its footprint to a selected and limited number of markets in Africa (such as in Morocco and Ethiopia) and geographies where it can be physically present and develop strongly differentiating local expertise.

Investing successfully in Africa requires a deep knowledge of local customs and practices, legal environment and networks, which can differ a lot from one place to the other. Therefore, the build-up of single country or regional sectorial platforms is far more attractive from an investment return perspective than the aggregation of multiple and diverse portfolio companies in a wide range of countries, Yassine concludes.

Read this Deal of the month, including Deal tracker and more via African Business Magazine 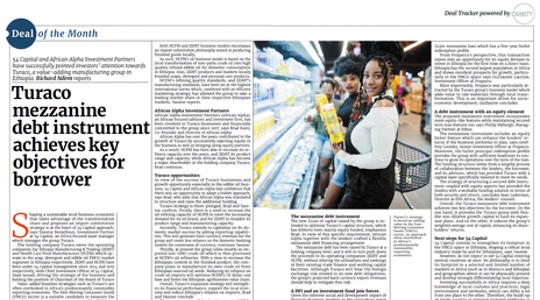